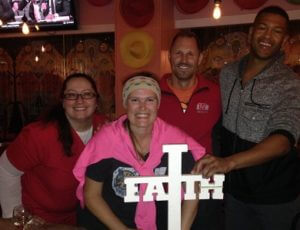 Published in the February 2018 issue of GoodNews

If your reaction to this title was one of “Whatcha talkin’ ‘bout, Willis?” you’re not alone. It implores one to search deeper into what this is all about, which is exactly what the man behind this initiative – Rev. Dr. Marcos Van Dorn – hopes you’ll do.

Being one of those inquisitive people, I went to see what a Wine Study and Bible Tasting looked like. Was there really wine drinking while delving into the Bible? You betcha!

What kind of church is this?!

Pastor Marcos (or Mark) is the founder of Florida Faith Church, a grassroots nondenominational, thriving Christian ministry. Alarmed in hearing that 85 percent of South Florida Christians say they don’t have a home church, Pastor Marcos was called to take action. Going to the people directly, he asked why they stopped going to church. Many were turned off by the traditional church – some because of doctrinal reasons, others because it didn’t seem applicable to their lives, and some indicated they felt uncomfortable in that type of setting. In response to this, he decided to meet people where they are spiritually and physically and create a revival.

I witnessed this myself at the December 14th Wine Study and Bible Tasting event, which met at Paloma’s Restaurant at Beach Place Mall on A1A. That night seven of us attended (but numbers sometimes take over the room) and each of us were in different stages of our faith. Some, who haven’t received Christ as their Lord and Savior, were there because they were hungry for something spiritual, and this type of setting was appealing to them. One attendee, Colleen — a new transplant from the D.C. area — found the church searching through MeetUp groups in hopes of finding a way to connect with others in South Florida. In her search she entered words such as ‘spiritual’, ‘wine,’ and ‘beach’ and found this to be a perfect fit.

On Sundays, Florida Faith Church, meets at Beach Place where all are welcome to attend, even in exercise/beach attire. Pastor Marcos’ come-as-you-are approach focuses on advancing the Kingdom of God and attracts people from a variety of demographics and backgrounds. And because of the locations being in a natural setting or at a public establishment, walkers-by can pop in impromptu. This actually happened the night that I attended. A pedi-cab driver who happened to see the sign stepped in for a quick ‘taste’ in between rides. What a blessing to be able to reach out to those who may not have the opportunity (or desire) to attend a formal setting church.

US Ski Team to Spain to business to ministry

While there are no typical ministers anymore, Pastor Marcos may have one of the most interesting backgrounds. As an extreme sports enthusiast, Marcos was a nominee for the US Ski Team and served as a National Ski Patrol. But because of a gymnastics injury to his knee, which putting him in a wheelchair for a while, he was unable to fulfill that dream. Though those hopes were sidelined, Marcos found another passion: the Spanish culture.

Besides teaching Spanish and creating Spanish-related dot.coms, Marcos lived in Madrid off and on where he met his wife, Olga, a Spaniard. Together they moved to the States, had a daughter named Gloria, and both had lucrative careers—one in business and one in journalism. Life seemed to be going as planned until…

The Lord started knocking on Marcos’ heart to serve Him in ministry. With the support of Olga and encouragement from several prominent pastors in South Florida, Marcos left the corporate world for seminary. From there he preached at various South Florida churches: First Presbyterian Las Olas, Church By The Sea and The Pink Church in Lighthouse Point. But then came the calling to follow Jesus’ example and plant a church without walls. This was the beginning of Florida Faith Church:  to connect, inspire and engage.

Keeping true to his love for nature, Pastor Marcos opened his first service at Hugh Taylor Birch State Park on May 28, 2017. In October the church found its home in Beach Place and is partnering with other churches for small groups and events. Pastor Marcos invites everyone to be themselves and enjoy the transforming words of the Gospel.

Chris Alexander is a freelance writer and an aspiring humble servant of Our Lord Jesus Christ.  Check out her GuitArt and events at www.MusicArtLove.com.